Claude Joseph Sauthier was a surveyor in the British Army during the American Revolution. He was born on November 10, 1736, in Strasbourg, on the Franco-German border, to Joseph Philippe, a saddler, and Barbe Primat Sauthier. Early in his life, Sauthier took an interest in surveying and draftsmanship. By the time he was twenty-three years old, Sauthier had completed one of the most impressive surveys of Alsace, assisted by Cassini De Thury, a French intellectual who revolutionized mapmaking in the region with his innovation of triangulation. In the mid-1760s, Sauthier arrived in North Carolina on a royal commission from the British Crown to survey and map the colony, where he worked under the eighth royal governor of Virginia, Lord William Tryon. During his tenure in the North Carolina colony, Sauthier completed twelve detailed maps of different localities. 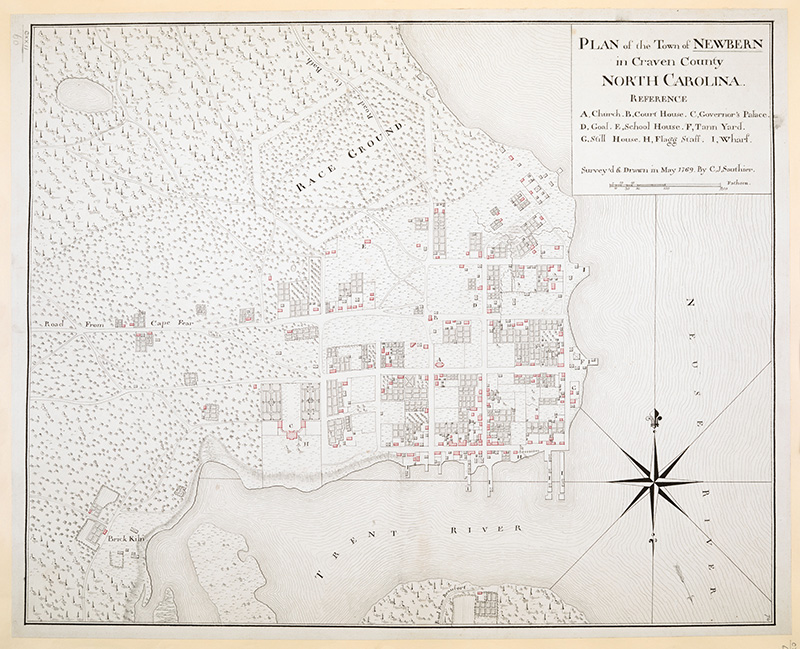 The most famous of these maps was the 1769 map of New Bern, which served as the seat of the royal government in North Carolina. This map, entitled A Plan of the Town of New Bern in Craven County North Carolina, depicts a detailed view of the colonial capital, complete with labeled roads, natural features, and the governor’s palace at the southern center, above the banks of the Trent River. The cartouche lists the important landmarks and their corresponding letters, including the wharfs (G) in the east and south, a church (A) in between Tryon Palace (B) and the eastern wharves (G), and the “Tann Yard” (E) just west of the Neuse River. The most prominent detail in the map is Tryon Palace, the royal governor’s private residence, which was completed with a prominent “Flag Staff” and featured a garden in the northern part of the property bisected by a walkway or a wall.

By the spring of 1770, Sauthier had completed several other maps and surveys of North Carolina towns, including Hillsborough, Bath, Brunswick, and Edenton. Sauthier’s work was recognized in a 1771 letter to the North Carolina House of Assembly, where Tryon praised Sauthier’s recent survey of the Granville District as being “attended [to] with much Fatigue and Expence of Travelling, as well as a considerable length of Time in performing those Services.” Tryon, impressed with “the Ingenuity of the Gentleman,” was pleased to “recommend Him [Sauthier] to Your [the assembly’s] Liberality.” Lord Tryon was so pleased with Sauthier’s work that, when he was appointed Governor of New York later that year, he brought Sauthier with him.[1]

In New York, Sauthier became a prominent surveyor for Lord Governor Tryon, conducting several surveys of the colony and New York City. The best known of these was his 1776 map of the New York province. The topographical survey depicted the administrative boundaries of New York in relation to the Long Island Sound, New Jersey, Quebec, and the land holdings of the Six Nations of the Iroquois Confederacy. The map was published by William Faden in his North American Atlas (1777). 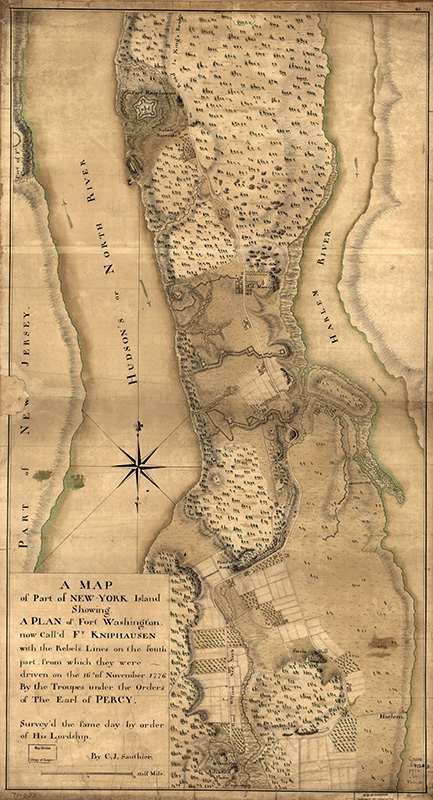 As the War for Independence spread across North America, Sauthier’s royal benefactors called upon him to join the British war effort against the continental rebellion. With his history of publishing detailed maps, Sauthier became one of the most important mapmakers in the Americas. In the early years of the war, Sauthier found himself in the employ of Earl Percy, an officer under the command of British General William Howe. While General Howe and Lord Percy fought the campaign in New York, Sauthier chronicled the feats and strategy of the British troops. In September 1776, Howe captured Manhattan from General George Washington’s troops, who retreated from the city. Sauthier illustrated this event in a map entitled A Plan of The Operations of The King's Army under the Command of General Sir William Howe, K.B. In New York And East New Jersey, against the American Forces Commanded by General Washington. The detailed map includes the forts, embrasures, and ramparts that Washington used to defend the city; also depicted was the damage caused by the large fire of September 21. Map scholar William Cumming considers it “the most important example of the maps developed from the Ratzer Plan” — the standard portrayal of New York in the 1770s.[2]

Sauthier worked alongside Earl Percy for the rest of the general’s service in the war. On November 16, 1776, when the British under Percy attacked Fort Washington, it was Sauthier who surveyed the field and constructed the battle map of the Continental fortification on the Hudson River. Scholars contend that William Faden’s engraving of the map was one of the most accurate and beautiful maps of northern New York Island. Later in 1776, Sauthier accompanied Percy to Newport, Rhode Island, where British General Henry Clinton had captured the key maritime post. These early days of occupation were captured in Sauthier’s Plan of the Town of New Port with its Environs, Survey’d by the Order of His Excellency the Right Honourable Earl Percy Lieutenant General Commanding his Majesty’s Forces on Rhode Island (1777). The map features detailed illustration of the harbor that was utilized by the British, old homes, and plots of farmland.

Percy soon fell out of favor with General Howe in 1777 over a command dispute. He left North America in May 1777, bringing Sauthier with him as a personal secretary. In this capacity, Sauthier crafted numerous estate maps for Percy after the latter ascended to the dukedom of Northumberland. Sauthier eventually returned to France, where he died in 1802 at the age of sixty-six.

A chorographical map of the Province of New-York in North America, divided into counties, manors, patents and townships

A map of the Province of New-York

A map of the provinces of New-York and New Jersey, with a part of Pennsylvania and the Province of Quebec

A plan of Fort George at the city of New-York

A plan of the operations of the King's army

Banner image: detail from Sauthier and Faden, A map of the inhabited part of Canada from the French surveys, 1777.

[1] William Tryon to the Assembly, January 2, 1771 in The Correspondence of William Tryon and Other Selected Papers, 2 vols., ed. William S. Powell (Raleigh: Division of Archives and History, Dept. of Cultural Resources, 1980), 2:557-58; Sauthier’s name was written in the original letter as “Southier”