Although best remembered as the father of Thomas Jefferson, Peter Jefferson was a distinguished man in his own right: a county justice, a burgess, a Virginia gentry elite, and a celebrated surveyor.  He was famous for his contributions to the Fry-Jefferson Map of Virginia, the most important map of Virginia drawn in the eighteenth century. His intellect, social status, and surveying exploits would leave an indelible mark on his son Thomas and, thus, American history.[1]

Peter Jefferson was born February 29, 1708, the fourth of six children to Thomas Jefferson (1677-1731) and Mary Field Jefferson (1679-1715). Peter’s mother died when he was only eight, a loss which likely contributed to what his son Thomas Jefferson later described as Peter’s “quite neglected” education. Still, possessing what Thomas called a “strong mind, sound judgement and eager after information,” Peter educated himself and improved his understanding of the world through books to the point where he could perform as well as, or better than, other members of the Virginia gentry. Jefferson took a particularly strong interest in mathematics.

At age twenty-four, Jefferson’s father died, and he became the beneficiary of properties on Manakin Creek and Fine Creek, where he built a house, dubbed “Fine Creek Manor.” Jefferson expanded his landholdings, acquiring a thousand acres by 1735. On October 3, 1739, Jefferson married Jane Randolph (1721-1776), with whom he had ten children, and the couple moved to the Piedmont region of Virginia to build an estate they called Shadwell. Jefferson was busy in these years, becoming a justice of the peace, a judge of the court of chancery, and a lieutenant colonel of the Albemarle militia, all while overseeing the business at Shadwell.

As the overseer of the Shadwell estate and the owner of thousands of acres of land, Jefferson practiced the skills of surveying regularly, and his renown in the field grew. Among his earliest known projects, Jefferson worked on a map of the Rappahannock River in 1737 with the surveyor Robert Brooke, and nine years later he mapped the Northern Neck of Virginia with Brooke’s son. Surveying offered Jefferson and the men of his era a profitable, well-respected career with powerful connections.

Jefferson’s most famous association was with Joshua Fry, the Albemarle County surveyor, with whom he is forever linked because of their groundbreaking work together. Jefferson and Fry worked together on various projects, including an expedition in 1746 to draw the Fairfax line between the claims of Virginia and Lord Fairfax’s grant for the land between the Rappahannock and Potomac Rivers. The Fry-Jefferson duo continued in 1749 by mapping the Virginia-North Carolina dividing line. This expedition became legendary in the Jefferson family through stories of Jefferson’s heroism and perseverance in the face of wild beasts and lack of food supplies. According to family legend, the expedition crew ate raw meat and slept in trees at night to survive. 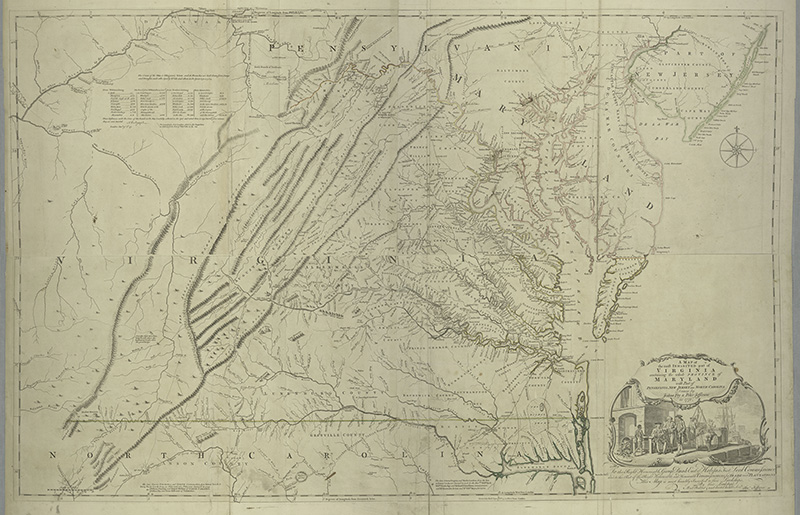 By 1750, as tensions increased between Britain and France over territorial claims in the Ohio Country, the English Board of Trade ordered a more accurate map of Virginia. Lewis Burwell, the acting governor of Virginia, commissioned Jefferson and Fry to complete the map. The pair relied on their own surveys and manuscripts, as well as existing maps by Captain John Smith from 1612 and Augustine Herman from 1673. They finished their work in less than a year. Jefferson and Fry delivered the map to Governor Burwell in 1751 and forwarded it to London, where it was engraved. The final copy was published in the summer of 1753 under the title A Map of the Inhabited Part of Virginia Containing the Province of Maryland, with Part of Pennsylvania, New Jersey and North Carolina. The map underwent subtle changes in the succeeding years, becoming A Map of the Most Inhabited Part of Virginia Containing the Whole Province of Maryland, known colloquially as the Fry-Jefferson Map of Virginia. As the most complete map of Virginia at the time, it was critical for the British Empire in its territorial competition with the French in North America. The map accurately recorded for the first time the Blue Ridge Mountains, the Virginia Valley, the two forks of Shenandoah River, and the entire colony’s road system. It also proved a valuable resource to later cartographers—including John Mitchell, who used it to help create the map of eastern North America used to determine the boundaries of the new United States for the Treaty of Paris in 1783.

After completing his work on the Fry-Jefferson Map, Jefferson served in positions across all levels of Virginia gentry politics: as Goochland County surveyor, again as justice of the peace in Albemarle, as county surveyor, as a member in the House of Burgesses, and in Fry’s position as county lieutenant following his death in 1754.

Jefferson also continued his duties at Shadwell, now a successful tobacco plantation maintained by over sixty enslaved workers. During the summer of 1757, Jefferson fell ill, and he died on August 17. He passed with his name attached to the most significant map of Britain’s largest North American colony and left his wife, six daughters, and two sons the largest estate in the colony. His son Thomas eventually built Monticello atop acreage once owned by his father.

A map of the most inhabited part of Virginia containing the whole province of Maryland with part of Pensilvania, New Jersey and North Carolina

Banner image: detail from Fry and Jefferson, A map of the most inhabited part of Virginia, [1768].

“The 1753 Fry-Jefferson Map and Its Predecessors and Derivatives.” The Library of Virginia, June 2021. https://lva-virginia.libguides.com/fry-jefferson.