George Gauld was a British surveyor and cartographer who produced notable maps of the Gulf Coast and the Caribbean in the mid-eighteenth century. Though of great quality and possessing an incredible degree of accuracy, Gauld’s maps, much like the man himself, existed in relative obscurity on the margins of the British Empire until after his death in 1782.

Born in Scotland in 1732, Gauld entered the world in a time of Enlightenment and British expansion overseas. While little is known of Gauld’s early years, he studied at Scotland’s King’s College, receiving high marks and displaying particular talent in mathematics, natural history, and philosophy. As a young man, Gauld became a naval schoolmaster aboard HMS Preston and toured the Mediterranean. Following his service as schoolmaster and discharge from the navy, Gauld labored to master cartography and pursued a respected and lucrative career as a surveyor-cartographer for the British Empire. Gauld’s official career as a cartographer coincided with the end of the Seven Years’ War and the British acquisition of Florida from the Spanish in 1763. The following year, the Admiralty dispatched Gauld to chart the new British territory.

In August 1764, Gauld arrived and took residence at the capital of West Florida, Pensacola, where he would spend much of the rest of his life. In the same year, Gauld would survey and produce a detailed plan for a harbor in his new residence of Pensacola. For the next seventeen years, he established himself as not only a masterful cartographer, but also as a staple of society and politics in Pensacola. Devoted to his cartography and possessing “a strong sense of duty,” according to his biographer John D. Ware, Gauld was neither a political partisan nor someone to abuse his position of power.[1] In the eyes of his neighbors, Gauld was therefore the ideal politician to represent them. In 1769, he was selected to serve as a representative of the Pensacola delegation to the West Florida General Assembly. 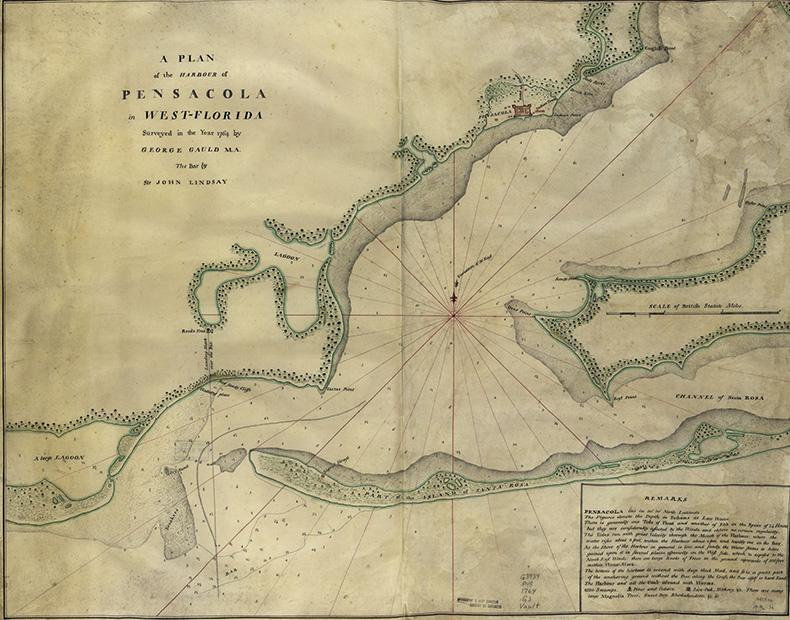 Alongside his achievements in cartography and success in local politics, Gauld also proved to be financially savvy. Often being the first to judge and appraise the lands he surveyed, Gauld used his insider knowledge and his political connections to amass wealth. In May 1776, he successfully petitioned West Florida Governor Peter Chester for an additional two thousand acres of land, “having resided chiefly in this province since its first establishment and being desirous of making a settlement on the east branch of the Peral River.”[2] Having established an impressive reputation in the British colonies as a cartographer and politician, Gauld married in 1776. Although little is known about  Ann Gauld beyond speculation that she was a widow of a military officer, the couple lived an active and social life, engaging in West Florida high society and entertaining a continuous stream of guests.

Florida remained loyal to Britain when the American Revolutionary War broke out and initially escaped the violence to the north. However, the situation changed dramatically with the delayed entry of Spain into the war against the British in 1779. The war spilled into Florida as Spain recaptured and ultimately retook Florida in 1780, exiling those who had settled there during the two decades of British rule, including George and Ann Gauld. While war raged around him in colonial North America, Gauld continued his passion and talent of cartography, completing a chart of the Pensacola bay harbor in 1780. After a period of exile in New York, the Gaulds retired to London where they lived out the rest of their days. George Gauld died not long after on June 8, 1782 at the age of 50, but his legacy as a cartographer was just beginning.

Gauld left Ann the small amount of their wealth they were able to recoup after the Spanish seized his holdings, as well as his obscure, uncirculated maps. To deal with her economic difficulties after her husband’s death, Ann partnered with publishers John Lorimer and William Faden to produce and sell Gauld’s maps. This partnership finally brought George’s maps into wider circulation, granting him posthumous fame and recognition.

Gauld’s maps played a role in the history of the United States after the Louisiana Purchase in 1803 and during the War of 1812. In October 1803, attorney and former member of the South Carolina legislature William Marshall sent President Thomas Jefferson Gauld’s “accurate Chart of the Coast of West Florida and Louisiana, including a survey and soundings of the Mississippi river, extending, considerably above New Orleans” to aid the executive in navigating and understanding the newly acquired territory.[3] Gauld’s map made another resurgence during James Madison’s presidency. In July 1812, Madison’s friend and informal naval advisor, William Tatham, stressed to the president the need to produce “similar documents of the British operations & works in Florida” to maps crafted by Gauld in order to combat the British in this theater of war, reinforcing Gauld’s legacy long after his death.[4]

A plan of the harbour of Pensacola in West-Florida

Banner image: detail from Gauld, A general plan of the harbours of Port Royal and Kingston Jamaica with the channels leading thereto, and the kays and shoals adjacent; including Wreck Reef &c,1772.