Robert Erskine (1735-1780) was a Scottish-American businessman, inventor, and mapmaker during the late eighteenth century. While he contributed to technological advancements in engineering and hydraulics, Erskine is most famous for his role as the first Geographer and Surveyor of Roads for the Continental Army from 1777 to 1780. He and his team of surveyors supplied the army with approximately 275 maps, which were imperative to American victories throughout the Revolutionary War.

Erskine was born on September 7, 1735, in Dunfermline, Scotland, to Margaret and Ralph Erskine, a Presbyterian minister. Robert attended the University of Edinburgh twice, once in 1748 and again in 1752. Although there are no records of his academic performance or completion of his studies, Robert moved to London in 1759 and found employment with a Mr. Swinton selling hardware and farm tools.

This arrangement lasted until 1760, when Swinton left with hopes of conducting business in the American colonies. He took a considerable amount of their product and Erskine never heard from him again, leaving Erskine to file for bankruptcy. Relying on his mechanical skills, Erskine invented the continual steam pump in the early 1760s to pay off his debts. By June 1762, he had no money and nearly twenty of his creditors filed a grievance. He was detained for a short period until the London debtors’ court freed him with the understanding that he would settle his accounts.

In 1764, Erskine followed that promise when William Cole, an instrument maker in London, sent his pump to the directors of the Salt Works of Westphalia to produce and manufacture the machine. Erskine continued to create new machines, including the platometer and the centrifugal hydraulic engine. His designs focused heavily on civic improvement, particularly as they related to rivers, which is reflected in his publication, A Dissertation on Rivers and Tides (1770). In 1769, after learning about Erskine’s work in civic improvement projects, a representative from the London-based Hasenclever, Seton & Crofts Syndicate in London approached Erskine with an exciting career opportunity. The group, also known as “The American Iron Company,” purchased four pig iron mines throughout New Jersey and New York and offered him the position of director. Erskine accepted the position and learned both the mechanical and technical elements of mines and furnaces as well as the process of converting iron into steel. By 1771, his work caught the attention of Benjamin Franklin and fellow members of the Royal Society of London, which awarded Erskine the title of “A Gentleman well versed in Mathematics and Practical Mechanics.”[1]

Erskine remained with the American Iron Company and shipped aboard the Britannia for New York, arriving on June 5, 1771. He spent the first year and a half in the American colonies as a mining inspector in the colony of New York. He reported the strengths, weaknesses, and possible improvements of mining sites to syndicates of the American Iron Company. In March 1773, Erskine was commissioned a justice of the peace in New Jersey. His correspondence with company syndicates reveals the political, economic, and environmental conditions of the colonies as they related to the mines. As the American Revolution became imminent, Erskine sided with the Americans. He understood that alliances and militias would be necessary to ensure the safety of the mines and their workers. This led him to organize one of the first companies of militia, which consisted of the men who worked for him. The New Jersey legislature officially commissioned him as a captain in August 1775.

This transition to military leadership gave Erskine another opportunity to use his mechanical skills. His next major invention was a tetrahedron-shaped marine cheval de frise, a defensive obstacle used to stop the passage of ships on rivers. Erskine’s invention was used to obstruct the Hudson River. American officers, including General John Morin Scott, saw the promise of the invention and began to build a chain of chevaux de frise at Fort Washington, but the British managed to take over the respective land before its completion.[2]

Erskine’s cartography career began in the mid-1770s when General Charles Lee asked Erskine to sketch the New York and New Jersey countryside. Erskine’s knowledge of the mining regions and his ability to detect land improvements aided in his work as a cartographer. While Erskine began sketching the New York countryside, General George Washington was in dire need of maps to make the best strategic and tactical decisions. Although Lee was captured at Basking Ridge soon after requesting the map, Erskine arrived at the Continental Army headquarters in March 1777 to present his work. Washington saw his map and asked for him to make another one of the New Jersey countryside, which officially began Erskine’s work as a geographer for the Continental Army.[3]

Upon receiving Erskine’s map of New Jersey, Washington wrote to Congress requesting an official geographer and surveyor of the roads. On July 25, 1777, Erskine officially assumed the post of Geographer and Surveyor-General. Erskine greatly expanded his department, adding a company of surveyors, including Simeon De Witt as his “chief lieutenant” in addition to nine others. 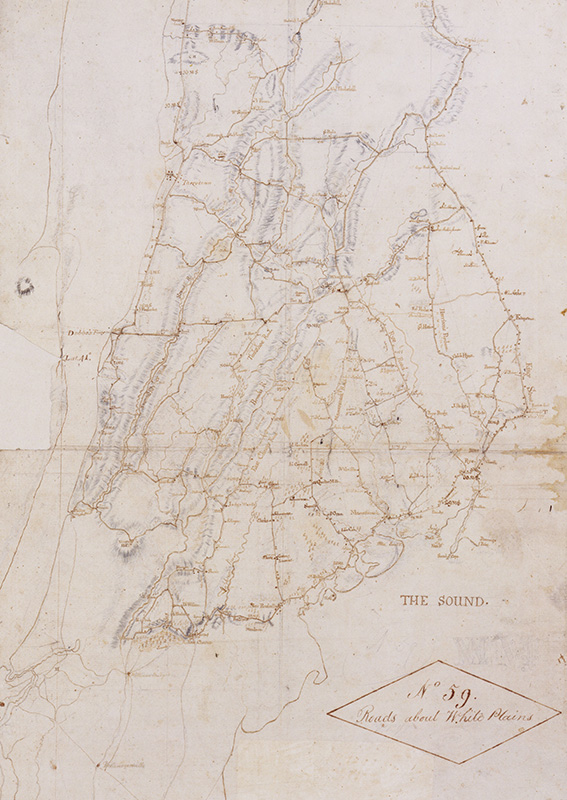 For the next three years, Erskine’s maps played an integral role in the war. His maps of areas like White Plains, New York, for instance, aided military navigation in 1779. Two of his maps of the Hudson Highlands, including the roads, rivers, mountains, fords, and marshes of the region, also informed operations by General Anthony Wayne and Major Henry Lee in the summer of 1779. After receiving the maps, Wayne led a successful nighttime attack on Stony Point and Lee attacked the British-held Paulus Hook, effectively pushing the British away from any control of the Hudson River. These victories might not have been possible without Erskine’s maps. Additionally, his headquarters near the mine and furnace at Ringwood, New Jersey, became such an integral supply depot for the Continental Army that Washington sent guards to protect the area from British invasion.

By 1780, Erskine’s surveyor department within the Continental Army had dwindled in size. With fewer surveyors on missions to sketch the countryside, Erskine was in the field more frequently. This led to his unfortunate and untimely sickness in the early fall. On September 18, 1780, Erskine died in his home, likely due to pneumonia, in the care of his nephew Ebenezer Erskine.[4] Following Erskine’s death, Washington appointed Simeon De Witt to serve as the next Geographer and Surveyor-General. Although Erskine did not witness America’s final victory, his efforts in creating nearly three hundred maps contributed greatly to military intelligence and strategy. Erskine’s legacy also resonates in current military cartographic institutions. The U.S. Army Map Service’s Erskine Hall houses numerous mapping functions for military operations such as photogrammetry, cartography, engineer intelligence, and geodetic libraries.

Cross Roads to East Chester, and above

Map of Orange and Rockland counties area of New York

Road from the White Plains to Bloomer's Mill at Rye Neck, and Cross Roads

[3] “From George Washington to the Continental Congress Committee to Inquire into the State of the Army, 19 July 1777,” Founders Online, https://founders.archives.gov/documents/Washington/03-10-02-0328.