Elizabeth Posthuma Simcoe (nee Gwillim) was a British writer, artist, and wife of John Graves Simcoe (1752-1806), the first lieutenant governor of Upper Canada (1791-1798). She is best known for her diary entries, watercolors, sketches, and maps of the frontier of Upper and Lower Canada from 1791 to 1796. Simcoe’s various works provide a unique insight into her life as a female cartographer and artist as well as a British explorer of Canada in the late eighteenth and early nineteenth centuries.

Simcoe was born in Aldwincle, Northamptonshire, England in 1762. Orphaned at birth, she inherited her family’s fortune as the sole heir of her father Colonel Thomas Gwillim. She was adopted by her aunt and uncle, Margaret Spinckles and Admiral Samuel Graves, and eventually married John Graves Simcoe, Admiral Graves’ godson, with whom she had eleven children. As a young girl, Simcoe likely received instruction in various art forms through her formal education, typical of the period’s standards for young women. By the time she reached young adulthood, she was especially talented in watercolor painting and sketching. John Simcoe was a cartographer by trade, and although it is not known who exactly taught her how to draw maps, Elizabeth was likely mentored by her husband in the practice.

Simcoe’s diaries have been extremely well preserved and contain not only various watercolors and sketches of Canadian scenery, coastlines, and maps, but also commentary and criticisms of other British surveyors’ work. She wrote in 1792 that their maps are “little better than sketches, little of the country having been surveyed. The surveyors draw slowly, and, I am told, when they want to suit their maps to the paper, do not scruple cutting off a few miles of the river or adding to it.”[1] In most of her diary entries, Simcoe briefly described her daily activities, the people she met, and the weather. In addition to keeping a diary, Simcoe also filled multiple sketchbooks filled with topographical drawings, watercolors of Canadian waterways, and maps of creeks and harbors. She frequently sent her sketches to family and friends in England, keeping them updated on her travels and recalling her activities at Niagara Falls or in Quebec. Simcoe was greatly involved in her husband’s career and her talent for cartography was found to be “extremely useful,” according to a letter written by Lord Dorchester while visiting the Simcoe family around 1805.[2] He stated, “Mrs. Simcoe is… bashful and speaks little… and fulfills all the duties of the mother and wife with the most scrupulous exactness. The performance of the latter she carries so far as to act the part of a private secretary to her husband.”[3] 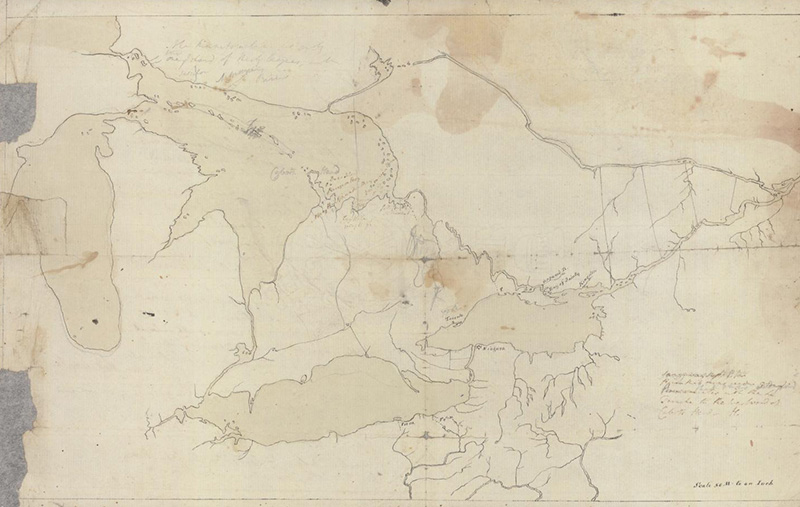 One of the most notable maps Simcoe ever created was her Sketch Map of Upper Canada Showing the Routes Lt. Gov. Simcoe Took on Journeys between March 1793 and September 1795. The map is scaled about twenty miles to an inch and features various established counties, waterways, and routes that Simcoe or her husband visited on their expedition of Upper Canada. Other information such as distances between major cities and proposed areas to build towns are noted. A selection of the art Simcoe created during her Canadian journeys was made into an album for King George III. Titled Drawing Presented by Governor Simcoe to his Majesty done by Mrs. Simcoe. View of North Canada, and a Map, the album contained thirty-two ink drawings on birch bark glued to paper, including an altered version of her 1793 Sketch of Upper Canada map. Some historians argue that this album of Simcoe’s pieces was gifted to George III to advance her husband’s career, emphasizing her central role in not only his success as a political figure but also in the reception of the Canadian frontier in London.

Elizabeth and John Simcoe left Canada in 1796 to reunite with their children in England after five years apart. She continued to produce watercolor portraits of the Canadian frontier until her death in January 1850 at the age of 87.