John Gerard De Brahm (also known as William De Brahm) was a German-born cartographer and military engineer. De Brahm achieved distinction in colonial Georgia and South Carolina for his expertly detailed maps, eventually rising through colonial ranks to become the surveyor general for the Southern District of North America between 1764 and 1775. His reputation was marred by several developments in his life, including his involvement in the emerging religious mysticism movement of the late eighteenth century. However, De Brahm’s contributions to early American geographical studies eventually proved massively influential.

De Brahm was born in Koblenz, Germany in 1717. In his youth, he excelled at languages, mathematics, history, and experimental sciences, which proved auspicious for his later pursuits in North America. Before immigrating to North America, he served in the army of Holy Roman Emperor Charles VII, eventually resigning in 1748. After denouncing Roman Catholicism, De Brahm was expelled from Bavaria, the first but not last time he was ostracized for his religious views. In 1751, with the assistance of a German bishop, De Brahm managed to immigrate to Georgia with 156 other religious dissidents as part of a mission to settle the town of Ebenezer.

Upon arrival, De Brahm quickly gained recognition for his mapping skills and was appointed Surveyor General of Lands for the royal colony of Georgia. De Brahm began to map the colony and in 1757 published his first work, A Map of South Carolina and a Part of Georgia. De Brahm’s first map was praised by readers and considered a landmark in British cartography for its meticulous depiction of the leading plantations of the day. A Map of South Carolina was also revolutionary due to De Brahm’s reliance on a scientific survey rather than popular belief. Between its presentation of the foremost planters and the opportunities for British westward expansion, the map reflected British imperial confidence by the mid-eighteenth century.

De Brahm soon rose to the position of surveyor general of the Southern District of North America. While in this role, he was assigned the laborious task of mapping the Florida coastline to illustrate the territory the British won in the Seven Years' War. As part of this project, De Brahm conducted surveys from St. Augustine to as far north as the St. Mary’s River. De Brahm also succeeded in mapping nearly all of East Florida between the St. Johns River and the Atlantic Ocean. Compared to the other maps of his day, De Brahm’s was uniquely scientific, relying on astronomical observations and trigonometry to determine the placement of various areas.

In 1771, however, the colonial governor of Florida stripped De Brahm his position as surveyor general and charged the cartographer with neglecting his duties on questionable evidence. De Brahm was subsequently sent to London to answer these charges. While awaiting trial, he published his Report of the General Survey in the Southern District of North America. After a royal board reinstated his position in 1775, De Brahm returned to America to create a map of Charleston. Unfortunately, the Cherokee, the ship on which he was traveling on, was captured by the British navy. De Brahm became a political prisoner and lived in London after the war. 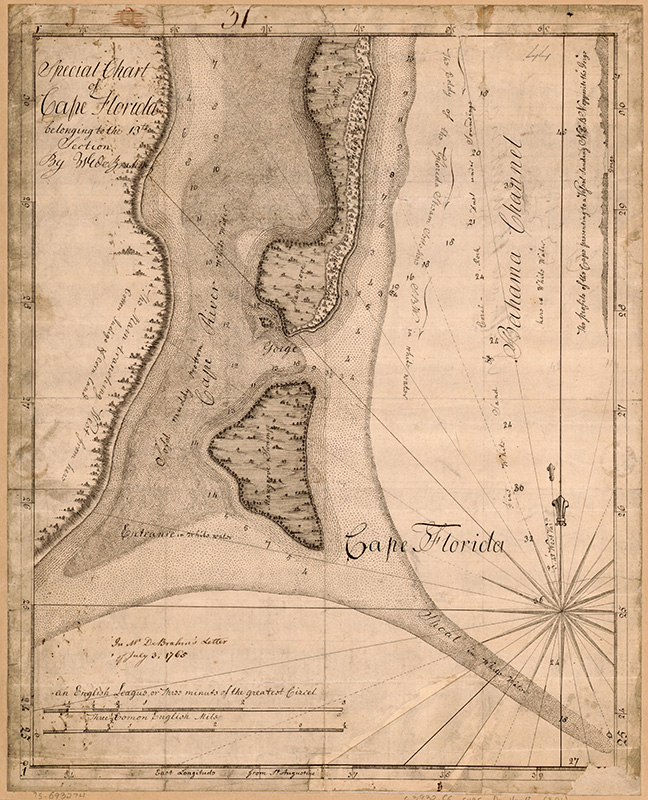 In 1791, De Brahm moved back to America and settled in Philadelphia, where he became involved in religious mysticism. He published three religious tracts: Time an Apparition of Eternity (1791), Voice of the Everlasting Gospel (1791), and Apocalyptic Gnomon Points out Eternity’s Divisibility Rated with Time Pointed at by Gnomons Sidereal (1795)—the last of which outlined his prophecy regarding the end of humanity.[1] Many of De Brahm’s writings regarding human history were grounded in his knowledge of astronomy and earth sciences. During this period, he also wrote President George Washington several letters that detailed his prophecies.[2] Washington’s attitude toward De Brahm’s views remains unknown, as he never responded.

In his later years, De Brahm also garnered controversy for his support of Native Americans and condemnation of British imperialism, both of which were central to his mystical beliefs. He argued that humanity should model itself after Native American culture, which he believed had largely escaped the influence of British tyranny. De Brahm also exhibited disenchantment with his previous career as a surveyor, whose sole purpose he perceived was to perpetuate British imperialism.[3]

In 1799, John Gerard De Brahm died in Philadelphia. For many decades after his death, his contributions remained largely unknown. He was remembered in South Carolina only for being “much addicted to alchemy, and wearing a long beard.”[4] Today, scholars can more fully appreciate the impact of De Brahm’s cartographical innovations.

Chart of the South End of East Florida and Martiers

Hydrographical map of the Atlantic Ocean, extending from the southermost part of North America to Europe

A map of Savannah River beginning at Stone-Bluff, or Nexttobethell, which continueth to the sea